Sugarman by the Monkeywrench 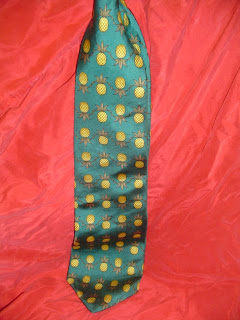 I'm also in an occasional band called Monkeywrench, sometimes the Monkeywrench and sometimes Monkey Wrench. I have no idea which is correct. This noisy little affair was written by a guy called Rodriguez, and a fine job he did too. This was recorded in Green Bay, Wisconsin at an all ages club. The good news was that there was a bar next door. The bad news was that they served a specialty drink called the Lunchbox.
The image accompanying this post is of a tie I have been known to wear whilst playing in Monkeywrench. Those yellow dots are pineapples. If you happen to see me around town wearing this tie then I'm probably on my way to a Monkeywrench show. By the way, we have a new album out called Gabriel's Horn.
Posted by Martin Bland at 10:15 PM

Wow I was at that show, and I have a video of the entire show. Crazy, I guess there is another recording of it out there, I thought i had the only 1.