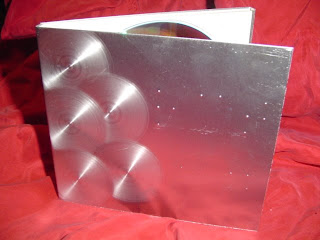 This regal looking object is the cover for the cd editions entitled Martin Bland's Randomized Control Trials. This project has consumed my non-parenting time for the last 5 years or so. The cd case, which was designed by Steve Dukich, is hand cut aluminum with individual circular brush marks and hand numbered braille indicating the edition number (there are 120 cds in all). Each of the 120 cd's has different music on it so each cd is exclusive unto itself. That's 720 different versions of the songs.

If you are interested in buying one, email me and I'll set you up with one. Paypal is accepted. My email is

Here is both an audio description of how the music was made and some long winded text. Click on the "Cd's For Sale" at the top of this post for "The Explainer" mp3

The concept for these songs was arrived at in September 2002 and finally completed in September 2007.
The premise involved using the "shuffle" program on a group of compact disc players running simultaneously to produce unique arrangements of original music.
All of the pieces followed a few guidelines: the musicians should be recorded separately from one another with little or no idea what the other musicians had played.
They would be given a loose theme to improvise on and a rigid tempo to follow.
These recordings, (sometimes hours long) were transferred on to a computer and cut into short phrases and fragments.
The best of these were selected to be burnt onto cd-r's.
Once all of the music for as piece had been recorded, each instrument was then assigned a cd player of which there were up to six.
The cd players were then played simultaneously with the "shuffle" program activated, thus producing a unique arrangement of the piece each time.
Some of the voices were of a "found" nature but none of the music was sampled from other sources.
Posted by Martin Bland at 8:38 PM