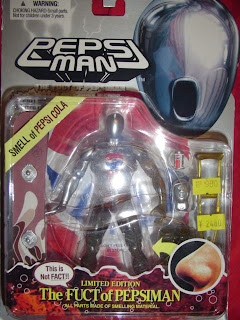 Another Monkeywrench tune. This is our version of the Saints song L.I.E.S. This track only came out as a B-side of a 45 in Japan. Whilst in Japan with the Monkeywrench I managed to find this action figure on a discount table in the middle of a shopping arcade. It's Pepsiman! He apparently smells like the soft drink pepsi taken out of his packaging. The front says "The Fuct Of Pepsiman". On the back it describes how he can "pop up Pepsi-Cola with 'Schwaaa!' action and deliver them around everywhere". He is also into"sideways-riding-sports such as surfing, snowboarding, skateboarding etc". It comes with accessories such as a snowboard and a cast and crutch. Judging from how many were on the table and the reduced price (980 yen), I guess no one gave a shit about Pepsiman.
Posted by Martin Bland at 10:55 PM

Any Chance You Could Post "Out Of Focus" The Blue Cheer Cover That The Monkeywrench Did???